The last day of the month: However for Harlem's rich history Black History Month  is really year round and quite bountiful.  When it comes to Harlem's signature cultural dance of the Lindy Hop the history and its History Makers there are many and their contributions priceless. 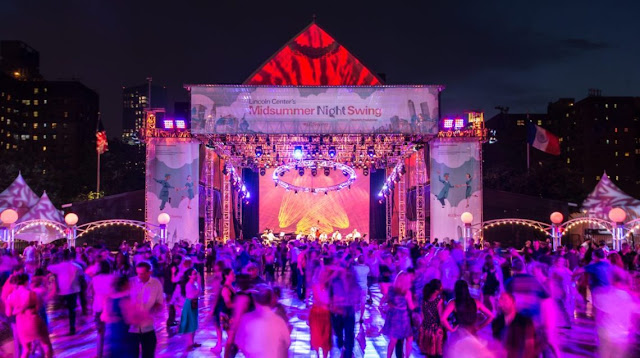 Just a few days before NYC's Mid Summer Night Swing event opened - our BEST outdoor dance party! - there was a free panel discussion on "The History of Lindy Hop".  It was moderated by Zita Allen, a Dance critic, author, and professor...and it was to trace the evolution of Lindy hop from its Harlem Renaissance roots to its modern-day revival.  Here is a video of what happened here   https://www.facebook.com/LCSwing/videos/2101401573227074/

Yes there was much history given.... we here feel there could have been more input on the New York City scene and the Harlem scene.  Examining both in the past and current context. Hearing about other states and countries at length  didn't fit in the equation or description; basically it took time from aspects of NYC that needed to be told.  Especially for newbies who have been dancing at least less than 12 years. For instance: Why did things blossom downtown and Harlem slow down with their social dance scene? Two Harlem Lindy Hop/ Jazz Dance Legends  - Sonny Allen and Barbara Billups - were present and could have talked about that (and Harlem's heyday of the Savoy Ballroom)....

However it is a broad subject for NYC alone that needs a Part 2 one day with folks who were on the scene to tell it. Hopefully that will happen whether uptown or downtown so those who are new to the scene will get a more balanced and thorough understanding.  Overall a good effort and a start to hopefully more historical talks happening in the city 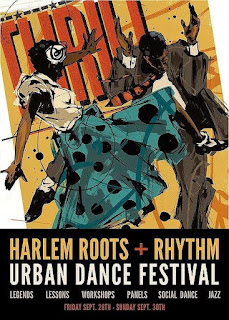 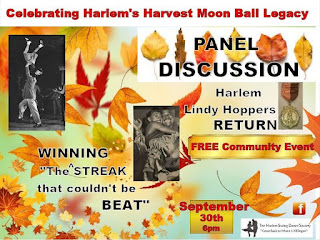 The first Harlem Roots and Rhythm Urban Dance Festival was this month as an effort to re-ignite interest the history of the Harvest Moon Ball contest (Harlem's input was critical) and to pay homage to living Harvest Moon Ball and Lindy Hop Dance legends still amongst us.  There was to be a more historical panel on the Harvest Moon Ball on Sunday, with Champions present (Sonny Allen, Barbara Billups, David Butts, Crystal Johnson, George Sullivan and Sugar Sullivan.  At this event were also plenty of the Mama Lu Parks dancers!  They were also critical to this long lasting winning streak never to be repeated with Lindy Hop at that world famous dance contest.

Unfortunately due to technical difficulties film footage was late and show after the panel discussion during the eve's social dance.  So with a panel starting 30 minutes late they still got in with 45 minutes to tell a new and interested audience of their share and memories of being there.  But of course having film clips simultaneously would have made a world of difference. This year's 2019 panel discussion in the Fall will be tweeked and be much better >) 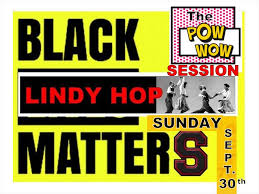 Hosted by The Harlem Swing Dance Society these forums are strictly for Black audiences.  We have gotten some great feedback and suggestions - and movement for knowledge and input from the Black community.  Why is this exclusive gathering for our mission needed?

The history in America with appropriation, ripping off, editing, capitalizing, etc of Black Culture - in a nutshell. Google or search for Lindy Hop or Swing Dance for starters and see what comes up: It appears that someone else has control of the product. For that and more reasons it is a safer environment to have those not invited who appear to be or are doing so.  That way more can be expressed honestly and more comfortably from attendees, along with a history lesson.  Most importantly how this culture can be brought back stronger in Black/Urban communities.  Solutions are sought and discussed so the "curse" can be reversed: Knowledge is Power :>)

What will YOU do? 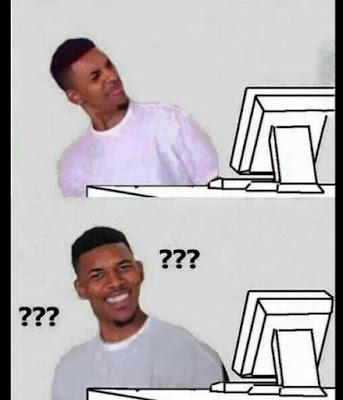 With so much info on the internet/world wide web some info is bound to get lost in the sauce.  Folks who have their treasured memories, artifacts and so forth; if they are not documenting these  can contribute to a tremendous loss of history.  And we do have sincere truth seekers of all shades and colors who on social media share their finds of photographs... things they search for relentlessly on microfilm... in various movies and newsreels of the past for snippets and more. This is just an example of their time consuming and valued efforts that are so much appreciated to tell the full story.

However on the flip side you have the Opportunists, Culture Vultures, "stars" of sorts and the "historians" in greater  Lindy Hop Land.  But lets be clear: These are in  Harlem and elsewhere sharing their "truths", exaggerations and edits that just further confuse matters.  Depending on the audience (and those who hang to their every word vs doing their own research) its getting critical and urgent to straighten out matters.  Sadly we have an individual in Harlem lying to a whole new generation for the past 5 years - and as "adornment" has a Lindy Hop legend's name attached to them.  Then you have funky fliers being pushed only telling a portion of history and then skipping decades.... have it appear for 30 years nothing was going on... thereby insulting the work and efforts of those who were preserving the dance culture at those time periods.

So you see these are critical times: ALL of the history and History Makers that is tangible must be included as their efforts are vital to the Harlem Jazz and Lindy Hop Dance history and future generations.  The truth always gets reveled and wins out ; just don't sit back and wait.  Be proactive :>) 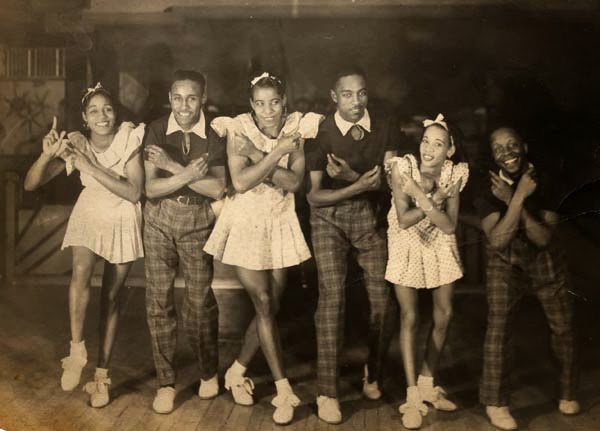 As Harlem celebrates the 100th year of the Renaissance, gentrification (or genocide) and more it is clear that Harlem's Lindy Hop Culture is under attack. If Black people  especially on Harlem do not get a hold of this rich culture and share/pass it down they have no one to blame but themselves for the current situation(s).

For example: There were 4 major groups (or generations) between the 1920's to the 1980's.  Do you know who they were? Did you know that there was innovation with Lindy Hop that was still going on in the 1970's?  Yes indeed and there is proof!  Also there were other small groups still making their mark, sharing and performing the Lindy Hop after the 1990's.... but you won't know that till you talk or join with folks willing to tell the WHOLE history (and not depend on one man or organization as the "go to"  :>)

As Brenda Dixon-Gottschild wrote in  2018: "All stories about the white interaction with the Lindy are not about love and theft.....With such a contested backstory of passion-aggression/love-hate, it is our responsibility to revise and correct the historical record on swing culture, and to give respect and pay credit where they are due.....and know and celebrate where the "swing" in swing comes from."

And Swing comes from Harlem's signature cultural dance of the Lindy Hop.

Brenda Dixon-Gottschild is an author, scholar, dance historian, performer, choreographer, and professor emerita of dance studies at Temple University. She has written four books: Digging the Africanist Presence in American Performance - Dance & Other Contexts; Waltzing in the Dark: African American Vaudeville and Race Politics in the Swing Era; The Black Dancing Body - A Geography from Coon to Cool; Joan Myers Brown & The Audacious Hope of the Black Ballerina - A Biohistory of American Performance.  Her 2018 article "The Swingin' Lindy: Origins of A Legacy" can be found at this link  www.lincolncenter.org/article/lindy-hop-origins
BTW - She didn't sanction a quote of hers on a recent flyer....

May 15, 2020
Ruby Reeves went to Smalls Paradise in the 1980s and  witnessed the transition of social dancing going from uptown to downtown. She knew Mama Lu Parks and many of  the regular Monday night Harlem crowd that listened and danced to Al Cobbs Band. She performed professionally doing the Tranky Doo (or her version  the Cranky Doodle").   It has been stated but not confirmed that she was also part of the 1982 famous Harvest Moon Ball dance competition.  But b ack in 1988 when a tribute was given to Mama Lu ( Tapping Through an Evening in Honor of Mama Lu Parks )   she was in grand company  https://www.nytimes.com/1988/12/29/arts/review-dance-tapping-through-an-evening-in-honor-of-mama-lu-parks.html Naturally she saw and experienced the "exodus" of Harlem's dance traveling from uptown to downtown. And uptown folk seemingly going with the flow because - in her words - "we weren't doing anything in our community".  Thus part of the sad rea
Post a Comment
Read more

November 27, 2019
" He's the teacher?!   I don't want that White Boy teaching me anything!"    "He's not teaching me my dance!" And with that they - some African Americans/ Black people -  do an about face and march out of the dance classroom... ________________ Harlem and Harlemites (aw heck Black folks!) can be a challenge - and that race card goes both ways a whole lot.  With that bad word "gentrification" and the bullying tactics in the area it can have some of the locals thinking EVERYTHING is being taken/stolen away from them.  So when some folks  - Black and White - see The Harlem Swing Dance Society's main teacher Rafal Pustelny he definitely generates all kinds of reactions.  SSSSSSSSSssssshhhhh.... Most times he is unaware of it ....  ;>) Oh but what they miss out on! Rafal Pustelny has built up quite a resume from the days we met him sometime back when he proudly spoke of "Boogie Woogie" influences. Th
Post a Comment
Read more

April 15, 2020
Dominick Robinson, Matthew Cherrington, Jessica Hand, Coral Foxworth, Kelly Robinson and Matthew Hunt "I've never heard of them!" people retort.  Well you missed out to a degree but they were part of Harlem's 20th century Lindy Hop story... perhaps rightfully so the 5th generation to keep the culture going  :>) The  Jitterbug  Kids were founded in 2001/2002 and were a group of 8...ranging in the ages of 7 to 10 years old. They were a fixture in Harlem and in NYC, performing at public and private events. Sarina Robinson started the group one year after she was inspired to start taking Lindy Hop/Swing Dance classes.  Having a Dance Studio helped as she gathered this group of children and trained them at dance workshops for one year. Then they were off! While they have grown up to be young ladies and gents they influenced many and got the attention of young and old alike.  These exciting and fun memories and groundwork that was established never
Post a Comment
Read more