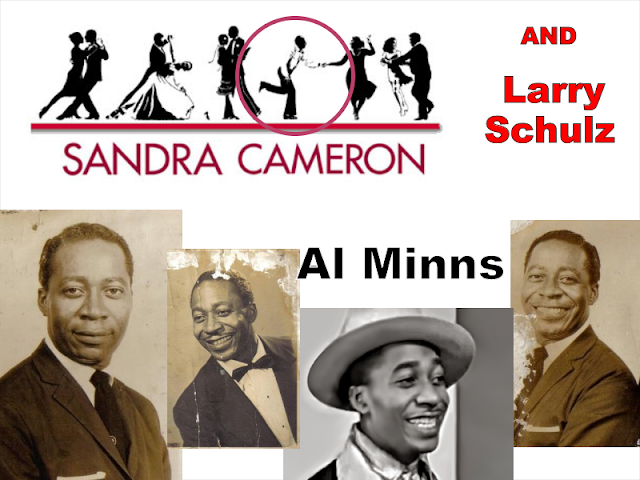 While visiting Queen of Swing Ms. Norma Miller months back she stated: “You should talk to Larry – if it wasn’t for him this thing wouldn’t have happened”...

She is right: This Lindy Hop/Swing thing wouldn’t be where it is – at least in NYC.  But the beginnings are a little more “complicated” than that.  Why? Because there are all different sides and opinions out there…  in print and articles written up… some partial and some accurate to the T.  And its obvious certain people are not talking to each other and/or are trying to leave key people out of the history just enough to let them “fade away”…
_________________________

We have talked to Larry Schulz before numerous times but now we want to get to some nitty gritty and yet fun aspects that folks need to know about.  So lets start at the beginning…  because they are the beginning of the DOWNTOWN revival.

Who is they?  Larry Schulz and Sandra Cameron. This time with the both of them chatting together was quite a treat! Sandra opened her dance studio in 1980 and offered a variety of dances.  Larry learned Lindy Hop as a kid. They both liked the dance but there was nowhere to go dancing downtown. Eventually they were in touch with a Dance Historian who told them they should go uptown to one of the Mama Lu Parks’ Harvest Moon Ball competitions to see the social dancing (Folks social danced during the intermissions of the contest).

They were aware they were going to see Al Minns, but seeing the contest with all of the fast dancing was “too much” for them to take all in. But it was exciting!  When it came part for the social dancing part it was mostly older folks (the younger were in the contest).

When the social dancing began it was within a small amount of time that they noticed a gentleman on the floor…. and according to their eyewitness account he stood out  and they were blown away….

How did Al Minns come to teach downtown with your studio? We persuaded him to teach downtown; we had no one and what he was doing was exactly what we wanted.  He was puzzled and a bit surprised; he said “No one wants this anymore…”

What was different about how he taught? When he taught he never counted – he danced to the beat of the music.  His body was totally connected to the music and was very exciting to see... it was so extraordinary

So what was done to remedy his style – or make it “simpler”?  Sandra codified his movements into counts so the students – mainly white - could understand.  If I didn’t patiently break it down and do that the students would have been lost because it was so difficult for them to understand the beat

Was Al offended, perhaps feeling like you had watered it down?  Al liked the count breakdown – but he never did it.  He taught his way in his classes, and he was happy that it worked for them to get it when it was taught by others in the studio.

So tell me about the 4 pasty white guys that visited the studio one day… When the Swedes came to NYC in 1984 they came to see Al Minns and take lessons with him.  They didn’t ask for anyone else.  We were shocked and later found out they had a hold of video clips of Whitey’s Lindy Hoppers (mainly Hellzapoppin) and had the steps down! This was before Facebook and the world-wide web, so word of mouth and/or some serious diligence and desire made them travel half way around the world to meet Al.

How strong was the impact and “re-discovery” of Al Minns? Both Larry and Sandra agree that Al Minns and his influence was the beginning of the downtown dance scene that was revived.  And that spiraled afterwards.
~~~~~~~~~~~~~~~~~~~~~~~
Aftermath

It is a sad shame that Al did not live to see the fruits of  his influence… but thankfully film and interviews exist of him in action...  having a revival of his own...
And thankfully Sandra and Larry have a plethora of artifacts and materials that are priceless and tell the early NYC history of the revival – once more – downtown.  But it connects to Harlem too, telling a story indirectly of a sort of non-appreciation on a level.

By means of this stunning collection we learn some more about Al Minns – and then in succession about Sugar Sullivan and Frankie Manning’s beginnings back on the escalating downtown scene.  All of these figures came from or represented Harlem both at the Savoy Ballroom and at the Harvest Moon Ball - and have a connection to Sandra Cameron and Larry Schulz.  This will be discussed in another post.

Interestingly Al stated back in the 80’s that “No one wants this anymore”.  Obviously he was talking of Harlem, or uptown.  And we believe he was talking about it being done socially (note Mama Lu Parks had them performing for the most part).  That’s one of the reasons why The Harlem Swing Dance Society (THSDS) was established; this along with a few folks’ efforts prior during the 80’s and 90’s to try to flip the script was critical.  Especially when the popularity increased and it became featured articles in newspapers and on TV News Stories.  This is where Larry used his expertise as he worked for NBC back then – and thankfully put word out.

So again the dance never died in Harlem.  There were smaller spots and other places folks danced socially at venues (Willies, Wells, Smalls Paradise).  Yet it certainly and eventually died down!

But you have to hand it to “downtown” at the time, because people – younger white people - did come uptown to Harlem social dance.  Then eventually, as this article shows (circa 1990), they got their own spots started downtown:  http://www.nytimes.com/1990/12/30/news/if-it-s-sunday-it-s-the-cat-club-swing-dancing-takes-over-again.html    Its an example that people can learn from.

So: Can the uptown so called “curse” be reversed? There is potential and promise but it will take a few factors against the onslaught of marketing, propaganda and perks downtown has been offering and luring folks with for years.  And some sabotage currently being done in Harlem.

Please note that we are not demeaning downtown events or want to appear to be “blaming” them for the shape Harlem is in with their dance culture.  No indeed. Whoever dropped the ball or legacy in Harlem – and there were many back then – most of them are not with us now.   So the upcoming results of clean-up jobs and techniques to get Harlem back into their famed dance more so - and if they’ll succeed - remains to be seen.  But for THSDS our efforts are all worth it – and rewarding.  Yes, it has its perks for us   :>)

STAY TUNED:  More with Larry and Sandra and their vital history in another post – Yeah Baby this Pow Wow session is just getting started!