Its never too late: Life Lesson and Remembering Malikia 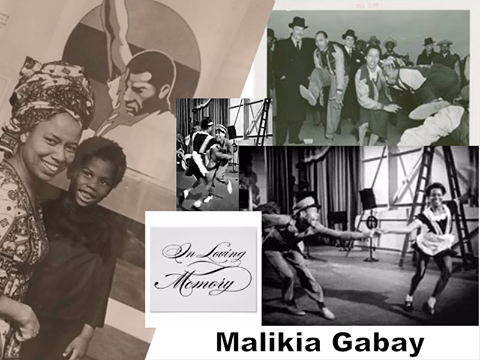 Malikia Gabay (nee Rosemary Jones) sadly  left us almost two weeks ago and she will be surely missed as a friend to The Harlem Swing Dance Society. She leaves behind her beloved son Kwabena Gabay.

Malikia was the only daughter of Frances “Mickey” Jones, one of Harlem's famed dance group Whitey’s Lindy Hoppers from the Savoy Ballroom.  Mickey is notable in a few classic Lindy Hop shorts including “Cotton Tale” with Duke Ellington and Whitey’s Lindy Hoppers and the classic performance clip from "Hellzapoppin’" that has thankfully been preserved on Youtube and other places to view.

Malikia believed the turban one was her Mom...

A Daughter's late Love
for her Mom's Dance Legacy

Malikia had a voice like a little girl and was a sincere giving Lady.  We would periodically meetup when she was in NYC, and of course keep in touch thru Facebook... sharing items we both found to help her in her quest for knowledge and artifacts.

See, as Malikia grew up she was aware of her mothers love of Harlem’s dance, and that she was constantly on the road performing.  She was raised by her grandmother and observed her comings and goings... but wasn’t in love with the dance at all.  When her mother stopped touring and took up other needed interests, well "that was that" in her mind.  She cracked me up with the story that as a teenager she wore one of her mothers old costumes for Halloween!

In the 1980’s before her Mom passed Lindy Hop and Swing dancing was becoming popular in the mainstream  due to the gap t.v. commercial and other movie clips making the rounds thru video.  But not to Malikia; she told her mother it was a phase and she didn’t take it to seriously… but that brightness and excitement on her mother’s face and in her voice always stayed with her.

Keeper of the Flame

However a change eventually did come about for Malikia to have her investigate more… and then a deeper appreciation of the history.  Whether it was Terry Monahagn, Judy Pritchert, Frankie Manning or what it finally took a serious hold on her and she started on her own intense research trail.  Her vast unique collection includes photos, magazines, newspaper clippings, books and more of her Mom.

She was fascinated on how The Harlem Swing Dance Society (THSDS) was doing their research and we swopped materials and ideas. Her last public appearance with THSDS was at the Museum of the City of New York in February 2014, where she was briefly interviewed on cable television and shared one of her treasured artifacts for the exhibit.

The Message, The Legacy

We here at THSDS met Malikia thru Judy Pritchert and can be ever so thankful that it happened!  She is gone too soon but her life lesson is important for all to learn from.  Its never too late to keep family traditions alive by taking note for the future generations.  THSDS has already warned her son to treasure her findings and not to share them on Facebook for select characters in “Lindy Hop Land” to take advantage of…  that is how rare many of her artifacts are.   She was excitedly looking forward to attending the American Lindy Hop Championships in October 2017 too   :>)

As The Harlem Swing Dance Society moves forward we will miss talking at length to the Lady who almost missed out in one sense... but then regained footing to search all she could about her mom’s historical dance legacy.  This is what we treasure as we talk to those in Harlem and elsewhere who are connected to this famed dance art form in one way or another.

There are SO many more out there out there with us who have gems between the 1930’s thru the 1990’s... who have the treasures in their hearts but are unaware that its still valued. Malikia's example can be a catalyst and inspire so many more to know that its never too late to look back, appreciate and record memories for your future loved ones. 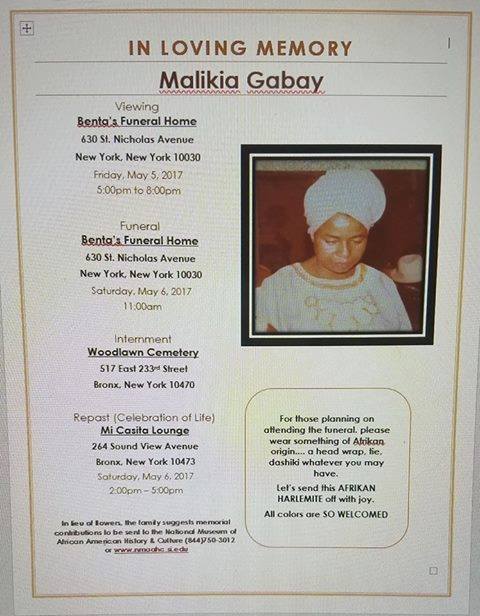