On May 26th 2014 World Lindy Hop Day was declared by The Frankie Manning Foundation.  This was part of the four day celebration held in New York and part of Harlem called Frankie 100.

Much of Harlem wasn’t at this event: No cut against them but in actuality they were “clueless” as to much of the festivities that were going on...

Here is the schedule  http://frankie100.com/festival-a-z/event-schedule/.   Perhaps around April and May they may have seen something in a newspaper about the event…  on a Harlem website or on Facebook , depending who their  friends were (or perhaps an ad)….  But alas there are a few reasons for this lack of Harlem “support”.

One major one is that the event was advertised primarily and seemingly for the greater Lindy Hop (Land) community.  It was advertised so much so amongst Lindy Hoppers that tickets for the event - IN SEPTEMBER 2016 for MAY 2017 – were  sold out in waves – and  in minutes.

Original plans I was told was for the whole event to be in Harlem, but being that it was Memorial Day weekend large spaces were closed for the holiday and/or other facilities were just too small.

Also during Memorial Day Weekend:  In the US many are used to getting out of town on that long weekend!


Now: If they weren’t exactly invited and didn’t feel wanted … and had other plans with family…  well….

But seriously there may be other factors for better or worse.

In due time in another post we will delve into the after math (and some bitter after taste) of Frankie 100 that is still felt amongst some to this day in Harlem.  Also some telling experiences and observations.

We will also muse and ponder about all that has happened since then in Harlem.  Did it help or hurt Harlem?  HMMmmmm 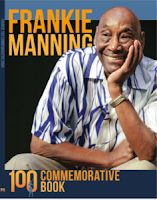 In the future we will do musings on both of these – stay tuned - and enjoy  :>)