Chopping it Up: Having Fun and Reminiscing with Lindy Hop Great George Sullivan 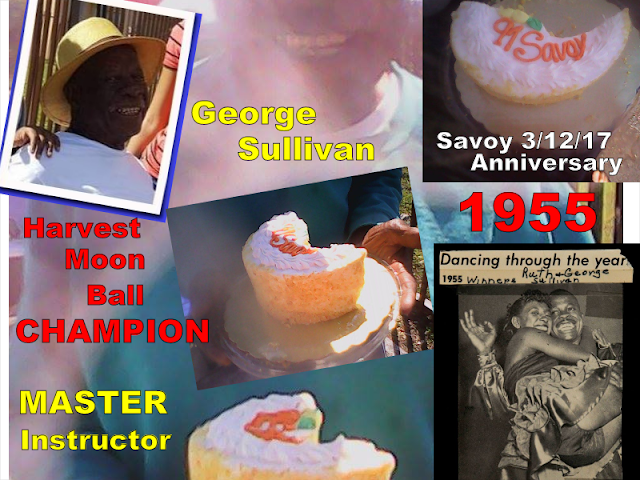 That little ditty and cutey of a song was popularized in Harlem years ago for a Charleston “stop” routine, which later came to be known as “First Stops”.  Its song author is George Sullivan.

George Sullivan has outlived many of his male legendary and famous peers of the late 1940’s/1950’s era of the Savoy Ballroom, but we are grateful he can tell so many of the missing links that greater Lindy Hop Land seems to neglect.

He got into Lindy Hop by accident – literally.  His wife had a bad fall with her then partner Delma “Big Nick” Nicholson.  Big Nick went on and got someone else for the upcoming Harvest Moon Ball, and George (a Non Lindy Hopper) volunteered to step in.  Sugar Sullivan laughed heartily at that notion, but low and behold they were on the stage at Madison Square Garden a few weeks later!  With more time, practice and determination (and a few years) they won the 1955 Harvest Moon Ball as Champions - WOW! 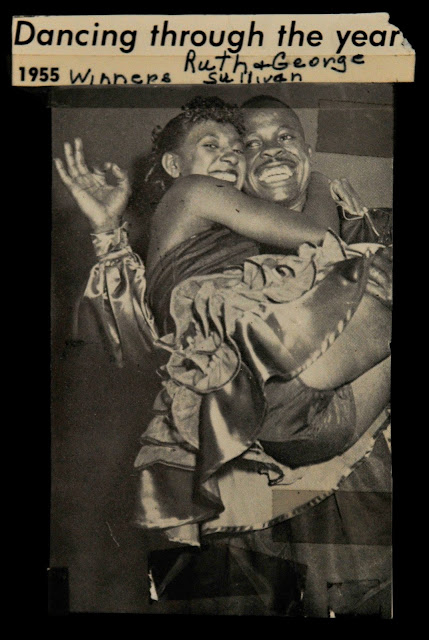 They are the only Harvest Moon Ball Champions  - in any category - to be featured on Ed Sullivan’s Toast of the Town twice doing Harlem’s famed dance!

This day in Florida the jazz was HOT and pounding on the street from his boom box.  His business partner was there as I approached – according to George with perfect timing – as they were discussing his dance career and the woman was in serious doubt about it.  My laptop opened, I got the video going and her jaw dropped.  The video performance from the Ed Sullivan show (Toast of the Town) had to be repeated three times as this woman was in shock and kept muttering “I don’t believe it… that’s his smile … that’s you?!”  She kept repeating in awe…

George just sat on the side in his chair howling, cracking up with joy like he just won the lottery!

Afterwards we chatted and reminisced about a few matters related to Harlem, The Savoy Ballroom, Mama Lu Parks and her dancers… and his contributions with her dancers.  Also the Harvest Moon Ball (HMB) and his buddies who were like brothers to him...

So The Savoy was really the place?

You betcha – we were there at least 8 hours a day!  We went in early and practiced…. When the kids (Sherry and Gerry) were babies and toddlers they were there in the corner on a blanket or crawling around.    We went home very late, maybe got 4 hours sleep and were back there as soon as they opened.  We were serious, in love with the dance, the music and all of it.  That’s why the Savoy has been referred to as Home from so many.  When it was torn down it was a tough blow

You and who else from the guys of the 1950's Savoy Ballroom era helped Mama Lu Parks and her dancers get ready for the Harvest Moon Ball each year?

It was me, Big Nick and Lee Moates.   We were there for the most part regularly. Those were some fun days; I miss them like brothers.

Thankfully footage has been preserved for folks to see in the documentary film “Spirit Moves” of both of these legendary great dancers.  Its so good to hear from you what else they had done critically for Harlem outside of the film! Sugar is in the film dancing her way around but you are seen in glimpses in the background observing and such.  How come you didn’t get in the Jam Circle?

I couldn’t sell myself like that.  See that lady (Mura Dehn) was throwing bills at the dancers to get them to go “perform” and dance in front of the cameras.  I couldn’t demean myself; I had my pride.

I see and great you didn’t - and kept your stand.   Now getting back to the HMB: Why do you think Lee Moates never won?

Well truth be told he was shorter than us and we danced in front of him!  At a certain angle looking up from the judge’s vantage point you had to make an impression and get their attention.  Poor guy was blocked by 6 footers and up (giggling).

With the Mama Lu Parks Dancers and the new Harlem youngsters who showed interest, how did you prep for them for the Harvest Moon Ball?

Oh I pushed them, I was tough!  They are telling you the truth when they say we were hard on them.  But we wanted that tradition to go on forever for Harlem and them to be serious about it.  NO couple went out there unless they were ready!  Those were magical times

And that little tune you had for them...

It helped drill the steps and all into their memories.  Those were exciting and thrilling times, especially when we walked them home from the Savoy (Manor) over the 145th Street bridge still singing and stepping at times.  I'll never forget it.

Its great that despite the accident and Sugar you were all able to remain friends within that classic Savoy 1950's group that remains cherished on film.

We had integrity to the dance, Harlem and the legacy.  We really helped each other out and knew the importance of Harlem keeping the Harvest Moon Ball crown. I miss all the people who are no longer with us, but I am glad you are asking about them and want to get it down right for the future...

The Harlem Swing Dance Society sure does want to get it down correctly and appreciates so many like George Sullivan who take the time talking with us.  There is much more to this interview that will be coming up another post.