Back Home to Harlem: The 2017 American Lindy Hop Championships (ALHC)

In this post we interview Paulette Brockington about The American Lindy Hop Championships coming Home to Harlem in October 2017. Tickets go on sale soon -  May 1st.  So heres a bit of an inside scoop, and more importantly HISTORY that we don't want to get lost ... and that we want Harlem and others to know :>)

What is the purpose of the American Lindy Hop Championships  (ALHC)?


ALHC's original purpose was to provide Lindy Hoppers a fair  and unbiased platform where they could compete, take class, network and enjoy away from other dance styles that looked down on them.

When did it start?

It started in anger. I was at the 1997 US Open. The event played one swing/Big Band song on Friday night. On Saturday afternoon, just before the Lindy, they called on the Lindy competitors out on the floor for their warm up song. They played Benny Goodman's "Sing, Sing, Sing".  It turned into a jam because duh how could they dance well in their division when they were blowing their wad dancing at 224 beats per minute for 8 minutes.  Anyway they were half dead by the end of it. So much so that most didn't dance well in the competition. Girls were dropped. Tricks were stalled.

I found it disrespectful. Afterwards I went to the flyer table. Looked to see when events were being offered. Found nothing on the last weekend of October. Went to the nearby Kinko's (now FedEx Office), made a flyer announcing the first American Lindy Hop Championships and added an email address for more information. I had no location but found one early the next year.

So you were one of the first of this type in the US?  Do tell...

When I did the first American Lindy Hop Championships theirs no other event like it in the world. Terry Monaghan wrote me several times  objecting to my calling it the first American Lindy Hop Championships because of the Saturday night contests at the Savoy and the Harvest Moon Ball Lindy Divisions. However those early events were not the same thing I was doing. I spoke with Norma Miller about it and told me to tell Terry to "shut the f*** up and worry about the Irish." I  didn't really do that but told him I appreciated his interest.... but I wasn't going to change the name of the event or drop 'first' from the event that year.

After that first event the outlook on the scene changed. I had no idea if anyone would show up. But they did. And I was proud.

Then subsequently Camp Hollywood added the National Jitterbug Championships,and after that other entities sprung up. But ALHC was indeed the first national contest dedicated to Lindy in the country. Maybe even the world. I know Herring hosted a World Lindy Hop Championship as part of the camp maybe a year or two before. Yet that event was sporadic and was mostly for Swedes.

What took you "so long" to bring it to Harlem?

I've wanted to bring ALHC to New York for a while.  I actually spoke to several people about it once I did the 10th anniversary in Stamford. But New York is an expensive proposition. ALHC is run by a nonprofit. Other events were (and mostly are) bankrolled. ALHC never has been. It's existed on the largesse of some individual donors, public funding and sponsorships. I don't produce ALHC then live of the proceeds for the next year. I produce ALHC then use any profit, if there is one, for community outreach and seed money for the next year's event. So the answer to your question is "Money, Honey"

What challenges have you faced with ALHC?

Challenges.... there have been many. From people not winning who believe I personally have it in for them, which is so far from the truth (particularly since I don't judge any of the contests).

But there was a lot of backlash when I hosted the World Lindy Hop Championship in 2005. They refused to allow my event to tabulate and brought in a computer program which named a different winner about 4 times. Many of the dancers blamed ALHC and me personally for that when I basically provide the floor for them to dance one and nothing else. Those have been a few.

What special is coming up on May 1st - besides it being the first day of selling tickets ?


There's a 24-hour discount on ALHC weekend passes for May 1. A limited number of people will have the opportunity to buy ALHC's weekend pass, normally priced at $200 for 50% off.


Lastly what types of activities, experiences and thrills can those coming from all over the world "Back Home to Harlem" expect?

Well to start off with we are planning talks and films that ALHC hasn't done before including meeting some of Harlem's Harvest Moon Ball dance legends. And attendees will have the opportunity to sign up for Historic Harlem walking tours.  People who are able to come earlier or stay late of course can enjoy more of NYC: Sight seeing, the Thriller Mob Dance in Harlem , the NYC Halloween Parade, and of course enjoying the diversity and history of Harlem.  It will be a blast! 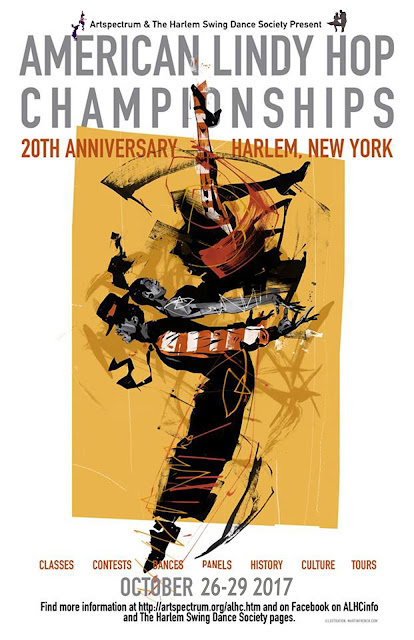 
The Harlem Swing Dance Society (THSDS) is proud to be assisting with this great and noteworthy effort! Here is the link for more information on tickets
https://www.eventbrite.com/e/2017-american-lindy-hop-championships-tickets-33794616608?aff=eac2

Stay tuned for more goodies and special deals that will be happening in Harlem for this event. Special Exclusive Tours specifically catered to Lindy Hoppers/Swing Dancers will be with Welcome to Harlem and The Harlem Swing Dance Society.  More on this exciting event in a future post!

May 15, 2020
Ruby Reeves went to Smalls Paradise in the 1980s and  witnessed the transition of social dancing going from uptown to downtown. She knew Mama Lu Parks and many of  the regular Monday night Harlem crowd that listened and danced to Al Cobbs Band. She performed professionally doing the Tranky Doo (or her version  the Cranky Doodle").   It has been stated but not confirmed that she was also part of the 1982 famous Harvest Moon Ball dance competition.  But b ack in 1988 when a tribute was given to Mama Lu ( Tapping Through an Evening in Honor of Mama Lu Parks )   she was in grand company  https://www.nytimes.com/1988/12/29/arts/review-dance-tapping-through-an-evening-in-honor-of-mama-lu-parks.html Naturally she saw and experienced the "exodus" of Harlem's dance traveling from uptown to downtown. And uptown folk seemingly going with the flow because - in her words - "we weren't doing anything in our community".  Thus part of the sad rea
Post a Comment
Read more

April 15, 2020
Dominick Robinson, Matthew Cherrington, Jessica Hand, Coral Foxworth, Kelly Robinson and Matthew Hunt "I've never heard of them!" people retort.  Well you missed out to a degree but they were part of Harlem's 20th century Lindy Hop story... perhaps rightfully so the 5th generation to keep the culture going  :>) The  Jitterbug  Kids were founded in 2001/2002 and were a group of 8...ranging in the ages of 7 to 10 years old. They were a fixture in Harlem and in NYC, performing at public and private events. Sarina Robinson started the group one year after she was inspired to start taking Lindy Hop/Swing Dance classes.  Having a Dance Studio helped as she gathered this group of children and trained them at dance workshops for one year. Then they were off! While they have grown up to be young ladies and gents they influenced many and got the attention of young and old alike.  These exciting and fun memories and groundwork that was established never
Post a Comment
Read more

November 27, 2019
" He's the teacher?!   I don't want that White Boy teaching me anything!"    "He's not teaching me my dance!" And with that they - some African Americans/ Black people -  do an about face and march out of the dance classroom... ________________ Harlem and Harlemites (aw heck Black folks!) can be a challenge - and that race card goes both ways a whole lot.  With that bad word "gentrification" and the bullying tactics in the area it can have some of the locals thinking EVERYTHING is being taken/stolen away from them.  So when some folks  - Black and White - see The Harlem Swing Dance Society's main teacher Rafal Pustelny he definitely generates all kinds of reactions.  SSSSSSSSSssssshhhhh.... Most times he is unaware of it ....  ;>) Oh but what they miss out on! Rafal Pustelny has built up quite a resume from the days we met him sometime back when he proudly spoke of "Boogie Woogie" influences. Th
Post a Comment
Read more