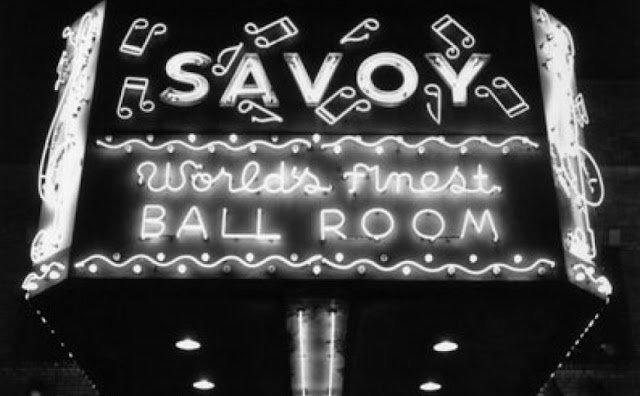 The legendary Savoy Ballroom was a large ballroom for music and public dancing located at 596 Lenox Avenue, between 140th and 141st Streets in  Harlem . The Savoy was the one ballroom in the area to be called the "World's Finest Ballroom".  The ballroom was 10,000 square feet in size, was on the second floor and a block long. It could hold up to 4,000 people. The interior was painted pink and the walls were mirrored. Colored lights danced on the sprung layered wood floor. It contained a spacious lobby framing a huge, cut-glass chandelier and marble staircase. 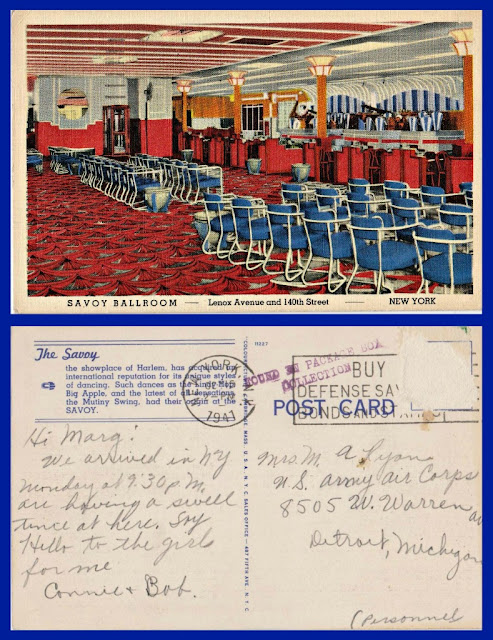 It was in operation from March 12, 1926 to July 10, 1958, and owned by white entrepreneur Jay Faggen with Jewish businessman Moe Gale (or gangster, as our dear old friend who worked there Charles Dorkins told us). It was managed by African-American business man and civic leader Charles Buchanan (who was also secretary and treasurer). 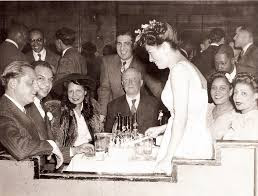 The ballroom was modeled after Faggen's downtown venue, Roseland Ballroom (a mostly white swing dance club). Blacks were not welcome there, so with swing music's rise in popularity (and Harlem becoming a connected black community) The Savoy gave talented and passionate black dancers an equally beautiful venue right in their area. 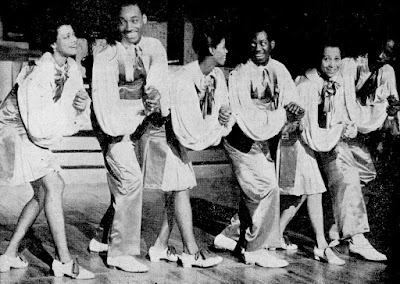 The Savoy remained lit every night of the week and had the constant presence the best Lindy Hoppers, known as "Savoy Lindy Hoppers". However as Norma Miller states in her biography after the Harvest Moon Ball of 1935 with a winning streak in the Lindy Hop division they were renamed  Whitey's Lindy Hoppers.  Herbert White (Whitey) an ex-boxer/bouncer at the Savoy organized and cultivated this group of young Lindy Hoppers. With his help they introduced the Lindy Hop to Europe the next year, turned professional and also performed on Broadway and Hollywood productions.

The Savoy always had a no-discrimination policy; with it being white/Jewish owned and it being opened in the midst of the Harem Renaissance (and prohibition) didn't hurt business.   This new  Harlem feature added to the allure of White folks coming to Harlem after hours.  As years passed after that time period they still came from downtown,Brooklyn and the Bronx. Italians, Irish and more to see and partake of the action.   So an integration that was “too early” to happen elsewhere was in the building happening on the dance floor in the Black Mecca of Harlem… 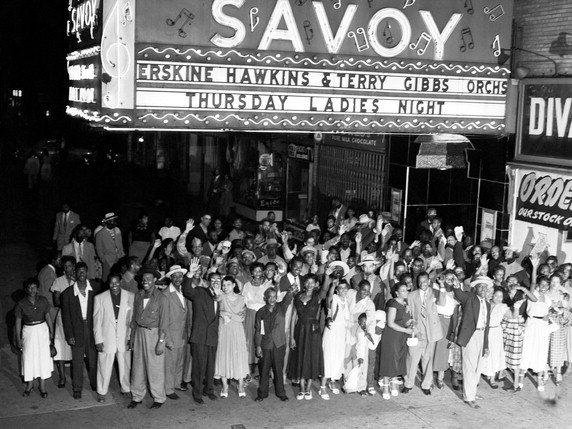 The staff of 90 permanent employees at the Savoy included musicians, waiters, cashiers, floor attendants, porters and administrative assistants. There were also hostesses with whom a visitor, mostly from downtown, could dance for a dime or be tutored on the latest steps, as well as a team of bouncers clad in black tuxedos and bow ties. 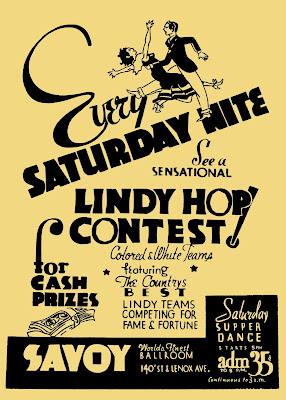 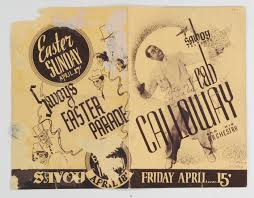 Over 250 name and semi-name bands were featured at the Savoy within its 32 year reign. The two bandstands allowed continuous live music all night, and provided the stage for the famous band battles. The most famous, and one of the most highly publicized, was the battle of Chick Webb vs. Benny Goodman. However the late night battle of 1938 with Chick Webb vs Count Basie was also viewed as a classic night to remember by Norma Miller and Frankie Manning.  Check the pic: Ella, Billie and all that wild talent on the same bill! 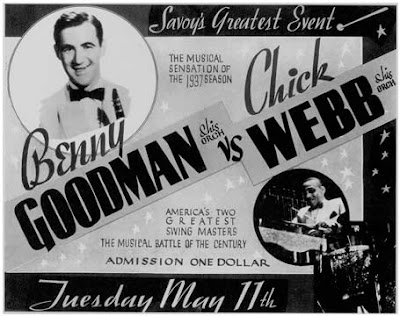 Future Be-bop stars like Dizzy Gillespie, Charlie Parker, Art Blakey and Thelonious Monk played there too. According to Ebony Magazine in 1946 Be Bop was Born at the Savoy Ballroom.  This is the dancing that Charles Dorkins mostly witnessed in between breaks as the house photographer... 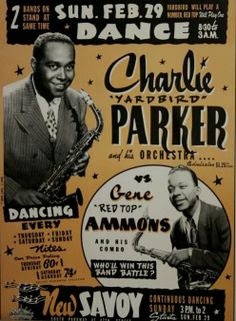 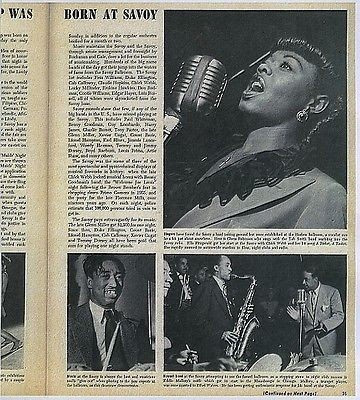 A long succession of dance fads were launched from the Savoy that swept the nation and overseas.  This was due to the war, travel and film. In response to ever changing music trends from dixieland, ragtime, jazz, blues, swing, stomp, boogie-woogie to be bop.  There were countless peabody, waltz, one-step, two-step and rhumba variations. Among the countless dance styles originated and developed at the Savoy were: The Flying Charleston, The Lindy Hop, The Stomp, The Big Apple, Jitterbug Jive, Peckin', Snakehips, Rhumboogie…. and intricate variations of the Peabody, the Shimmy, Mambo and more. 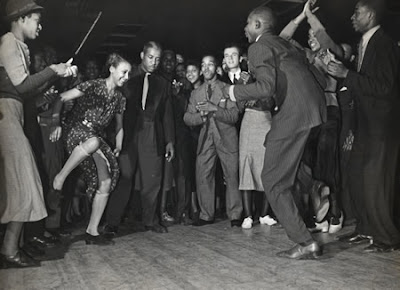 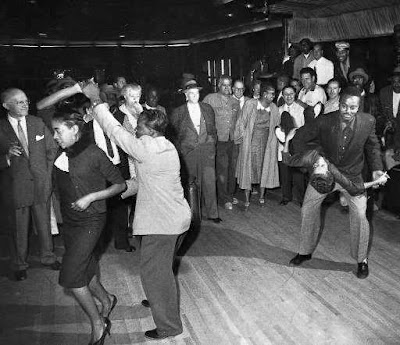 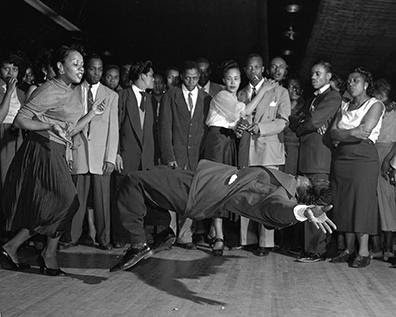 YES: Harlem was full of Trendsetters. One can only imagine had the Savoy been open during the 1960’s to have Motown, Stax, KING, Atlantic and other urban R & B Soul labels in the ballroom: What we could have witnessed!

This famous crown jewel of Harlem was the staple dance spot until it sadly closed its doors in 1958. Thankfully Lindy Hoppers from the Savoy and their heirs from the Savoy Manor in the Bronx still dominated and kept the tradition of winning the annual Harvest Moon Ball (HMB) contest in Madison Square Garden until the 1980's. Keepers of the Flame still with us such as Debra Brown, David Butts, Darlene Gist, Tony Gomez, Ralph Hopkins, Joya James, Crystal Johnson (SECOND generation Champion - her dad Tops Lee won in 1940!) , Kalua Malau, Richard Moultrie, Rudy Nelson, Quentin Powell, Yvell Richardson, Jamie Roberson and Gloria Thompson. HA - that's only a FEW of them! These champions under the tutelage of Ms. Louise “Mama Lu Parks” Duncanson and other HMB Champions of the 1950’s made sure the tradition was passed down and cultivated for the future (1960's - 80's). 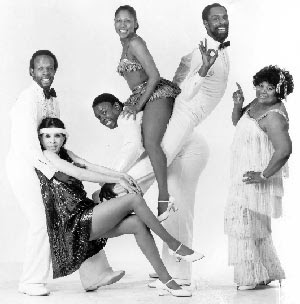 The Savoy Ballroom tradition and legacy with Lindy Hop continues to thrive today thanks to films and other documented accounts.  Thankfully as well as living legends such as Sonny Allen, Barbara Billups, Gary "Kit" Lewis, Norma Miller, Beatrice Pierce, Willie Raynor, George Sullivan, Sherry Sullivan and Sugar Sullivan.  Also there are the numerous dancers influenced by Mama Lu Park's efforts.  These include Savoy Ballroom veterans who became instructors and mentors to a whole new generation: Lee Moates, Delma "Big Nick" Nicholson and George Sullivan. We also have great bio-books by dancers Frankie Manning and Norma Miller. There are also numerous articles that can be researched on the internet with video and in varying books interviewing the likes of Alfred “Pepsi” Bethel, George “Shorty George” Snowden, Al Minns and Leon James to name a few. 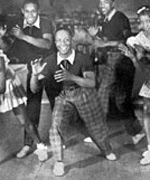 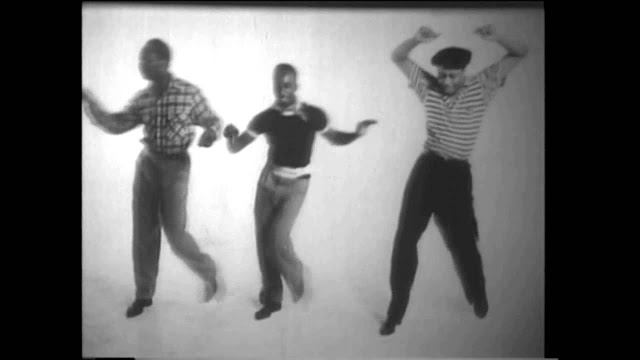 And The Harlem Swing Dance Society knows folks who personally knew many of these dance masters: They either danced with them, studied under them or interviewed them.  Or were kin to them.  Recently we lost a treasure with Clementine "Tiny" Thomas.  She was a TWO time Champion of the Harvest Moon Ball with her partner George Williams!  THIS is the history we want Harlem to know about...
It is the main part of The Harlem Swing Dance Society’s mission that this rich history and Harlem tradition be promoted, preserved and propagated in Harlem.  Rightfully so, so new generations of Black Harlem youth can have pride in this culture – and be future Innovators. Right in Harlem. Harlem used to set trends with this culture: Thats why folks came up to see and study the latest creativity. Truthfully thats the case with 90% of popular dances, fads and such!  HELLO: They came from Black people (aka African Americans).
This exciting culture can have an exciting re-birth with the youth.  And it will. You'll see for yourself soon how in Harlem Black Lindy Hop clearly matters. 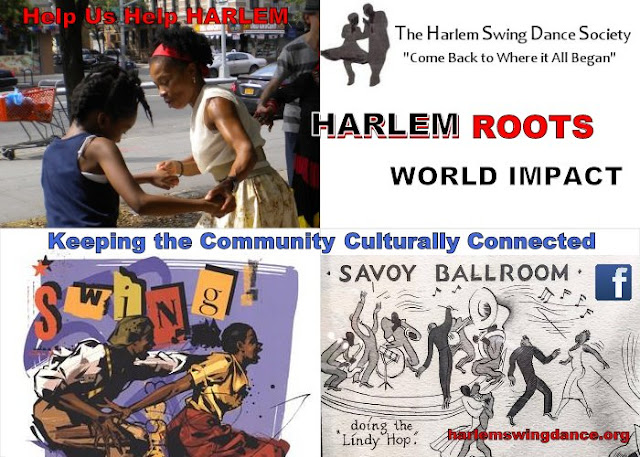